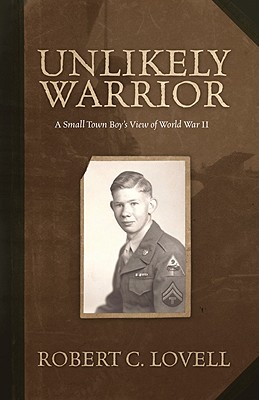 Author's gift inscription on half title page. Also Dedicatory page is signed by the person to whom the author dedicated this book. The author entered the U. S. Army days after graduation from High School in 1944. This is his first-hand account and experience of the Second World War. Black cloth with gold spine lettering. No writing in the book. 599pp. Rare signed copy. Full refund if not satisfied.

Beginning and ending in the same small Oklahoma town, Robert Lovell's story could be that of almost any other member of "The Greatest Generation" in America's history. Told in frank yet innocent details, Lovell's story comes to life in more details than you would find in a history book.

This honest and touching memoir starts out with summers in the Scouts and faint radio murmurs of unrest in faraway places. As World War II creeps ever closer to the American consciousness, Lovell finds himself in basic training, shooting targets and learning codes.

Stationed in Germany during the latter part of the war, Lovell turns 19 just weeks before V-E Day. By the time he turns 20 just ten years after the start of the story, Lovell has faced more than most people do in a lifetime.

A first-hand memoir of one of the most pivotal decades in the history of the United States, Unlikely Warrior was put to paper at the insistence of the author's grown children. Its lessons, however, can benefit all.

A Sketch of the New Zealand War (Signed First Edition)

The Theology of Romantic Love; A Study in the Writings of Charles Williams (Owen Barfield's copy) (Signed First Edition)

Santa Clarita : Valley of the Golden Dream - An Illustrated History (Signed by author)