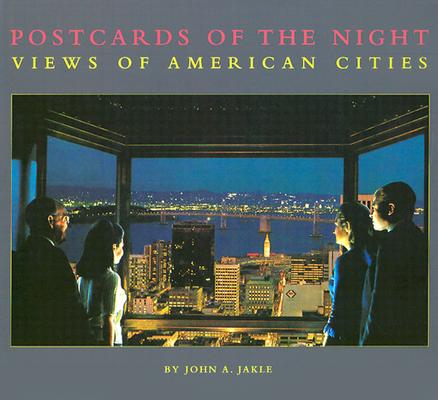 Postcards of the Night: Views of American Cities (New)

Illustrated with eighty vintage city postcards made between the turn of the twentieth century and through the 1970's (with the emphasis on the first four decades), historical geographer, John A Jakle turns his attention to early-twentieth-century nocturnal views of America's cities and to the role of the picture postcard in popular culture. 'Postcard images', the author writes, "offered important visual 'fixes' -- mental templates for visualizing cities -- the vista of a downtown street at night, or a bird's eye view of a vividly lit downtown, or the dramatic lighting of monuments and other architectural landmarks. As a result, the popularity and proliferation of the penny postcard influenced how Americans thought about cities as landscape displays." New copy in publisher's shrink wrap. This book would make a great gift. Full refund if not satisfied.

In the first book of its kind, landscape historian John Jakle turns his attention to early-twentieth-century views of America's cities at night, in this collection of rare postcards.

Title: Postcards of the Night: Views of American Cities (New)

Postcards of the Night: Views of American Cities (New)