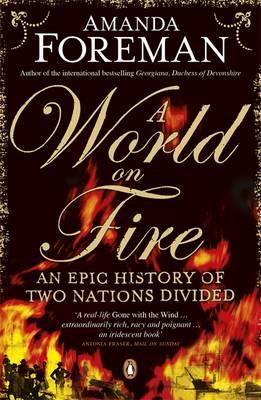 A real life Gone with the Wind. 'No two nations have ever existed on the face of the earth which could do each other so much good or so much harm President Buchanan, State of the Nation Address, 1859A World on Fire tells, with extraordinary sweep, one of the least known great stories of British and American history. As America descended into Civil War, British loyalties were torn between support for the North, which was against slavery, and defending the South, which portrayed itself as bravely fighting for its independence. Rallying to their respective causes, thousands of Britons went to America as soldiers - fighting for both Union and Confederacy - racing ships through the Northern blockades, and as observers, nurses, adventurers, guerillas and spies. At the heart of this international conflict lay a complicated and at times tortuous relationship between four individuals: Lord Lyons, the painfully shy British Ambassador in Washington; William Seward, the blustering US Secretary of State; Charles Francis Adams, the dry but fiercely patriotic U.S. ambassador in London; and the restless and abrasive Foreign Secretary Lord John Russell. Despite their efforts, and sometimes as a result of them, America and Britain came within a whisker of declaring war on each other twice in four years. The diplomatic story is only one element in this gloriously multifaceted book. Using a wealth of previously unpublished letters and journals, Amanda Foreman gives fresh accounts of Civil War battles by seeing them through the eyes of British journalists and myriad soldiers on both sides, from flamboyant cavalry commanders to forcibly conscripted private soldiers. She also shows how the War took place in England, from the Confederacy's secret ship-building program in Liverpool to the desperate efforts of its propagandists and emissaries - male and female - to influence British public opinion. She even shows how one of the most famous set-piece naval encounters of the War was fought, remarkably, in the English Channel. Foreman tells this epic yet intimate story of enormous personalities, tense diplomacy and torn loyalties as history in the round, captivating her readers with the experience of total immersion in this titanic conflict.Paperback. Thick xxxvii, 988pp., index. Illustrated. Full refund if not satisfied.

An account of the stories and sacrifices of many British men and women who fought on both sides in the American Civil War.

A Sermon, Preached At Church in Brattle Square, 1/19/1840, on the Destruction of the Lexington by Fire

The Twelfth Report of the British and Foreign Bible Society; 1816. with an Appendix, Containing Extracts of Correspondence, Etc.

By: (British and Foreign Bible Society)