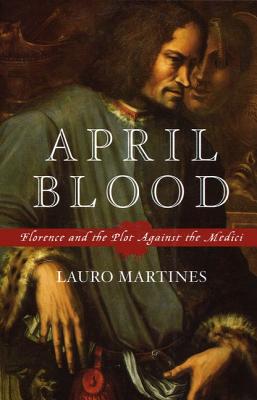 April Blood: Florence and the Plot against the Medici

April blood offers readers a fresh portrait of Renaissance Florence, where dazzling artistic achievements went side by side with violence, craft, and bare knuckle politics. This book is like new in condition.Full refund if not satisfied.

One of the world's leading historians of Renaissance Italy brings to life here the vibrant--and violent--society of fifteenth-century Florence. His disturbing narrative opens up an entire culture, revealing the dark side of Renaissance man and politician Lorenzo de' Medici.

On a Sunday in April 1478, assassins attacked Lorenzo and his brother as they attended Mass in the cathedral of Florence. Lorenzo scrambled to safety as Giuliano bled to death on the cathedral floor. April Blood moves outward in time and space from that murderous event, unfolding a story of tangled passions, ambition, treachery, and revenge. The conspiracy was led by one of the city's most noble clans, the Pazzi, financiers who feared and resented the Medici's swaggering new role as political bosses--but the web of intrigue spread through all of Italy. Bankers, mercenaries, the Duke of Urbino, the King of Naples, and Pope Sixtus IV entered secretly into the plot. Florence was plunged into a peninsular war, and Lorenzo was soon fighting for his own and his family's survival. The failed assassination doomed the Pazzi. Medici revenge was swift and brutal--plotters were hanged or beheaded, innocents were hacked to pieces, and bodies were put out to dangle from the windows of the government palace. All remaining members of the larger Pazzi clan were forced to change their surname, and every public sign or symbol of the family was expunged or destroyed. April Blood offers us a fresh portrait of Renaissance Florence, where dazzling artistic achievements went side by side with violence, craft, and bare-knuckle politics. At the center of the canvas is the figure of Lorenzo the Magnificent--poet, statesman, connoisseur, patron of the arts, and ruthless "boss of bosses." This extraordinarily vivid account of a turning point in the Italian Renaissance is bound to become a lasting work of history.

Title: April Blood: Florence and the Plot against the Medici

Those of My Blood (Advance Reading Copy)

April Blood: Florence and the Plot against the Medici