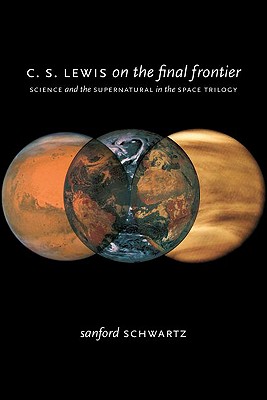 C. S. Lewis on the Final Frontier: Science and the Supernatural in the Space Trilogy

C.S. Lewis's celebrated Space Trilogy - Out of the Silent Planet, Perelandra, and That Hideous Strength - was completed over sixty years ago and has remained in print ever since. In this groundbreaking study, Sanford Schwartz offers a new reading that challenges the conventional view of these novels as portraying a clear-cut struggle between a pre-modern cosmology and the modern scientific paradigm that supplanted it.
Schwartz situates Lewis's work in the context of modern intellectual, cultural, and political history. He shows that Lewis does not simply dismiss the modern "evolutionary model," but discriminates carefully among different kinds of evolutionary theory-"mechanistic" in Out of the Silent Planet, "vitalist" in Perelandra, and "spiritual" in That Hideous Strength-and their distinctive views of human nature, society, and religious belief. Schwartz also shows that in each book the conflict between Christian and "developmental" viewpoints is far more complex than is generally assumed. In line with the Augustinian understanding that "bad things are good things perverted," Lewis constructs each of his three "beatific" communities-the "unfallen" worlds on Mars and Venus and the terrestrial remnant at St. Anne's-not as the sheer antithesis but rather as the transfiguration or "raising up" of the particular evolutionary doctrine that is targeted in the novel. In this respect, Lewis is more deeply engaged with the main currents of modern thought than his own self-styled image as an intellectual "dinosaur" might lead us to believe. He is also far more prepared to explore the possibilities for reshaping the evolutionary model in a manner that is simultaneously compatible with traditional Christian doctrine and committed to addressing the distinctive concerns of modern existence.
C.S. Lewis on the Final Frontier highlights the enduring relevance of Lewis's fiction to contemporary concerns on a wide variety of issues, including the ethical problems surrounding bio-technology and the battle between religious and naturalistic worldviews in the twenty-first century. Far from offering a black and white contrast between an old-fashioned Christian humanism and a newfangled heresy, the Space Trilogy should be seen as a modern religious apologist's searching effort to enrich the former through critical engagement with the latter.

Title: C. S. Lewis on the Final Frontier: Science and the Supernatural in the Space Trilogy

Walks of Jesus: Meditations by B. Lewis (Signed)

Of Other Worlds: Essays and Stories

C. S. Lewis on the Final Frontier: Science and the Supernatural in the Space Trilogy