Signed by the author on front free end paper. Widely regarded as the greatest actor of the twentieth century, Laurence Olivier (1907-1989) was as troubled as he was talented. A man desperate for affection and approval, plagued with self-doubt and self-loathing, Olivier escaped his personal conflicts on the stage, where he perfected his skills to a remarkable degree. His interpretations of Shakespeare, Chekhov, Coward and countless other playwrights on stage made theater history, and his performances in the films Wuthering Heights, Henry V, Richard III, and Spartacus are equally legendary. S... View more info 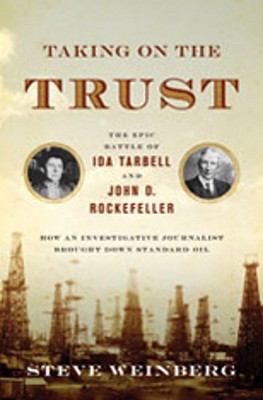 Taking on the Trust: The Epic Battle of Ida Tarbell and John D. Rockefeller

The biographies of investigative reporter, Ida Minerva Tarbell, and one of the world's wealthiest men, John D. Rockefeller. Ms. Tarbell's reporting eventually led to the landmark antitrust decision by the U. S. Supreme Court. Beige paper cover with silver lettering on spine. 304 pp., index. Dust Jacket is in very good condition, without tears or chips or other damage. Nice copy. Full refund if not satisfied. View more info

Thirkell wrote over 30 novels and established a reputation as the grande dame sans merci of the London literary world. This is the first biography of Thirkell. Burgundy cloth with gold spine lettering. Dust jacket is not price clipped. Illustrated. 182pp., index. Full refund if not satisfied. View more info

The Life Of John Duncan

By: Stuart, A Moody

Memorial To a King (George V)

The Year of My Rebirth

No writing in the book - not even an owners name. binding tight, Full refund if not satisfied. View more info

A. J. A. Symons: His Life and Speculations

Primarily known as the accuser of Alger Hiss, Whittaker Chambers was a commanding, complex figure who was center stage during many of the public events of his time, yet remained intensely private. This book covers Chambers' personal life, as well as his emergence as a dominant voice in the postwar ant-Communist movement. Two toned cloth. New copy. Mylar cover. xiv, 638pp., index. Full refund if not satisfied. View more info

Trials and Triumphs an Autobiography

Memorial Addresses on the Life and Character of Thaddeus Stevens, delivered in the House of Representatives, Washington, D.C., December 17, 1868 (First Edition)

Herringshaw's Encyclopedia of American Biography of the Nineteenth Century: Accurate and Succinct Biographies of Famous Men and Women In All Walks of Life Who Are and Have Been the Ascknowledged Leaders of Life and Thought of the United States Since It's Formation, Entirely Covering the Field of Literature, Science, History, Politics, and the Mechanical and Industrial Arts

Black cloth covers with gilt lettering/designs. Marbled page edges. End-papers marbled. Illustrated with portraints. cxx, 1046pp. Covers and spine are stained, as well as rubbed and discolored in place. Text body is clean and free from underlining, highlighting, or notes. Good only. Full refund if not satisfied. View more info

Passages in a Wandering Life

An Annotated Autobiography (Signed) From the Library of Morton H. Smith

First Edition. Inscribed by the author to Morton Smith on front free end paper. Original cellophane dust wrapper is loose fitting. Board slightly warped. Illustrated. xiii, 113pp., index. Full refund if not satisfied.This book comes from the personal library of Morton H. Smith but does not have his personal library marking. This from Wikipedia: Morton Howison Smith (December 11, 1923 to November 12, 2017) was an American Presbyterian minister. He was the first Stated Clerk of the Presbyterian Church in America, serving from 1973 to 1988, and also served as its Moderator in 2000. Smith h... View more info

Herringshaw's Encyclopedia of American Biography of the Nineteenth Century. Accurate and Succinct Biographies of Famous Men and Women in All Walks of Life...(First Edition) ..

The Life of Izaak Walton; including Notices of His Contemporaries, by Thomas Zouch

The Carolina Tribute to Calhoun

Butler's Lives of the Saints (Vol. 3 Only of 4) July - September

What Goes Around Comes Around: The Lives of Tina and Frank Keller (First Edition)

By: Tina and Frank Keller

By: Torsney, Cheryl B.

Woolson was a perceptive writer who understood the task of female artistry and the suffering it was bound to produce. She was a sensitive woman who recognized her precarious, powerless position in a changing world. Nice first edition copy in a mylar cover. Illustrated. Green cloth with gold spine lettering. Textured end papers. 177pp., index. Full refund if not satisfied. View more info

From Corrib To Cultra: Folklife Essays In Honour Of Alan Gailey (First Edition)

Gailey was former director of the Ulster Folk and Transport Museum at Cultra in County Down. Like new paperback. Erratum slip bound in. Portrait frontispiece. Illustrated. No writing in the book. x, 257pp., bibliography. Solid copy. Full refund if not satisfied. View more info

Black cloth with gold lettering. Author's gift inscription on title page. There is no other writing in the book. xi, 186pp. Portrait frontispiece. Illustrated. Full refund if not satisfied. View more info

Burgundy cloth with silver lettering. No writing in the book. Mylar cover. ix, 629pp. Dust jacket shipped at head of spine and at top of rear cover. Still an attractive solid copy. Full refund if not satisfied. View more info

A melodrama of fortune, conflict and triumph about the famous American industrialist. Orange publisher's cloth with black lettering and design on spine and front cover. No writing in the book. xvii, 377pp. Frontispiece portrait. Spine sunned. Full refund if not satisfied. View more info

Memorial Addresses on the Life and Character of Dudley C. Haskell (A Representative from Kansas), delivered in the House of Representatives and in the Senate, Forty-Eighth Congress, First Session (First Edition)

Caxton & the Art of Printing, with James Watt & the Steam Engine

(2 Vols.) Rubbed boards, edges worn, corners bumped. Inside clean & mostly uncut. Growing out of meetings of the friends of William Stevens, who called the group "Nobody's Club", nobody referring modestly to himself, the club continued after Stevens' death as "Nobody's Friends. " Made up of equal numbers of Churchmen & Laity many notables of English life are represented. A third volume was published in 1949 to bring the list of members up to that date. Size: 8vo. 435 pages. 2-volume set (complete). Quantity Available: 1. Shipped Weight: 4 pounds or less. Category: Biography & A... View more info

Lives Of Scottish Poets, with Portraits & Vignettes (Vol. 2 Only of 3)

Appletons' Cyclopaedia of Biography: Embracing a Series of Original Memoirs of the Most Distinguished Persons of All Times (First American Edition)

Beyond the Hills: An Ulster Headmaster Remembers

Dusk of Dawn: An Essay toward an Autobiography of a Race Concept

Augustus Baldwin Longstreet a Study of the Development of Culture in the South (Ed. with Intro. & a Wade Bibliography by M. Thomas Inge)

Signed. Limited First Edition, #145 out of 300. Frankfurt mouldmade paper and Aldus type. Designed and printed by Grant Dahlstrom. Quarter blue cloth with light blue decorated paper boards. Mylar cover. Uncut fore and bottom edges. 39pp. A small spot or two of sunning on upper edge of board. Clear piece of tape on mylar cover. Book is in fine condition. Full refund if not satisfied. ""Walker Percy, Obl.S.B. (May 28, 1916 ? May 10, 1990) was an American writer, whose interests included philosophy and semiotics. Percy is known for his philosophical novels set in and around New Orleans, t... View more info